GORING GAP: 6 Yellow Wagtails flew east as did 86 Siskins, 12 Linnets. Swallows and House Martins were moving through in number but difficult to get definitive counts as many followed the tide line which was quite far out. 20c Chiffchaffs were scattered around and at least 6 Blackcaps. There was 4 Stonechats on the east side and the Kestrel was around. Meadow Pipits featured in numbers again all mainly moving north east. 5 Skylark were in the ploughed fields. Nick Bond 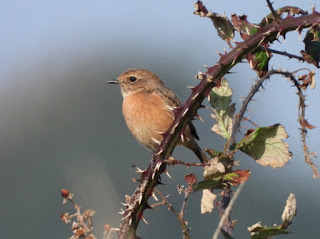 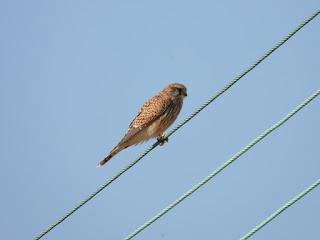 SALVINGTON: A single Buzzard over, Chiffchaff in garden still and a Pied Wagtail. Nick Bond

SHOREHAM: Whilst having lunch in the garden I noted a Siskin flying over calling, and a few Swallows. A juvenile Woodpigeon that flew into our back window with a loud thud yesterday evening was pottering around and clearly none the worse. At high tide on the river there were 41 Turnstones on the boats between the railway and the main road. Steve Gilbert via SOS. Also Sandwich Tern.

WORTHING:  A morning to wind down a bit and catch up around the house, though I spent quite a bit of the morning in the garden, where I caught three Chiffchaffs and overhead there was passage involving 35 Siskins, 40 Meadow Pipits, two Pied/White Wagtails and two Swallows. A Jay was a fairly unusual garden sighting. David Campbell

BIKE RIDE FROM LANCING: I started in Lancing, then north to Downs, then Cissbury Ring back through Worthing. Great morning full of moving birds. Lots of Chiffchaffs, actually they were everywhere today plus good numbers of House Martins and Swallows plus four Sand Martins over Lancing. Also 2 Red Kites drifting low towards the sea and 2 Ravens. Yellowhammers, Linnets, flock of 20 Corn Buntings and countless Meadow Pipits. Cissbury Ring full of birds, at least 4 Yellow Wagtails, 30 plus Stonechat, Whinchat, some Siskins passing, 5-6 Redstarts, at least 6 Spotted Flycatchers and some Whitethroats and Chaffinches. On the way back probably my last Hobby this year passing over Lancing. Seems like farewell to summer! Shemi via SOS

CISSBURY RING: Still many Chiffchaffs and Blackcaps around this morning; Whitethroats also. Single Wheatear at top being a regular at the moment, along with the usual Stonechats among the gorse. 3 Swallow, 12 House Martin and 3 Mistle Thrush. Andy Ashdown 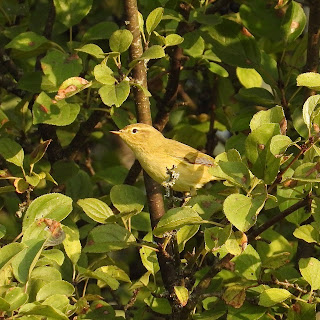 SHOREHAM: Upon arrival at the beach around 08:45 this morning I was greeted by two Wheatears and later I saw at least another two but it is possible that there were more despite the high number of people and dogs. At the Fort a couple of Greenfinches, a few Meadow Pipits, 8 Turnstones and the usual gulls. Walked back and over to Widewater Lagoon but I didn't see any more Wheatears on the beach. However, a group of six Common(?) Terns, flying along the edge of the water, made the walk worthwhile. At the Lagoon a Little Egret, gulls, flocks of House Sparrows were all present but more interestingly a female-looking Mandarin Duck with a very bright red bill (maybe a juvenile male?) was hanging out with two Mallards of which the male looked like a hybrid. Along the whole of the seafront about a dozen Swallows and the same number of House Martins were flying low constantly. Non-bird highlights were about 8 Clouded Yellows and a Painted Lady at the Lagoon. SOS
A circuit taking in the Adur and Widewater this morning with Zoe Courchene produced a good variety of birds including a Wigeon and 7 Ringed Plover between the old toll and railway bridges, a Yellow Wagtail and three Linnets on Shoreham Rec, a Greenshank by the houseboats, ca.20 Gannets offshore, a Sparrowhawk, a Kingfisher and 9 Siskins E at Widewater, and another Kingfisher in the channel by the Dogs Trust. A steady trickle of hirundines including a Sand Martin headed E into the stiff breeze, also a few Meadow Pipits and a single Grey Wagtail. SOS

CISSBURY RING: I met with up Paul Goodman at Cissbury Ring, where highlights included a Hobby, a male Redstart, a Spotted Flycatcher, a Mistle Thrush, 17 Siskins, a Grey Wagtail, 41 House Martins, 27 Swallows and a Red Kite. David Campbell and Paul Goodman

DURRINGTON: The Peregrine was roosting again this evening on Skyline apartments. Nick Bond

GORING:  Final total was 139+ Siskin E (all but 15 on the coast) 6 Wigeon & 2 Common Scoter W, 2 Sanderling in with the usual waders and 2 Knot E along the beach near Sea Lane on the way back. Meanwhile, Karen, lazing at home, had c60 Siskin E over Sompting village. Mike and Karen Galtry

WORTHING: Vismig from my garden in the first part of the morning produced two Ravens giving a cronk or two - a garden tick!, a late Swift, 240 Siskins, a Great Spotted Woodpecker, two Yellow Wagtails, 37 Meadow Pipits, 35 House Martins, a Sand Martin and six Swallows. A Chiffchaff was in the garden. David Campbell

THE DOWNS: "Bike ride started in Lancing then north through Downs to Coombes and Shoreham. Best were some migrants crossing Downs, two flocks of Siskins (five and nine) both E, also this direction were heading flocks of Swallows, House Martins and also Sand Martins plus countless flocks of Meadow Pipits plus I think I heard one Tree Pipit passing. Between herd of cows 10 Yellow Wagtails were feeding along with five Wheatears nearby and Stonechat. Two Ravens also recorded plus singing Chiffchaff." SOS

WEST WORTHING:  I caught a Chiffchaff in the garden, where a Yellow Wagtail, 17 Siskins and eight Meadow Pipits flew over. David Campbell

WORTHING PIER; Three Turnstones and a male Kestrel off the sea. SOS